When the Horizon Foundation began in 1998, Dick McCauley remembers the somewhat stunning feeling of starting with a blank slate.

As the foundation’s first board chair, McCauley said it went something like this: “Here’s 70 million dollars. Go and do good.”

The money came from the sale of the Howard County General Hospital to Johns Hopkins. And the vision of the foundation, in an important way, came from Jim Rouse, said McCauley.

Rouse’s vision for Columbia had an understanding of community health running through its veins. “Health is created through education, conventional healthcare, social institutions, physical development, transportation: all the elements that make a successful community also make a healthy community,” said McCauley.

In 1998, at the moment the foundation was created, its leaders began a constructive yet intense debate about the best ways to “do good.” They decided this meant facing some massive challenges.

“We would take on major, difficult health-related and community issues,” McCauley said. “For example, at the time, the leading issue was the absence
of health insurance. Nobody wanted to take that on. It’s so complex and, ultimately, so money-dependent. Any organization taking that on would take a long view and would have the financial staying power to develop a strategy.”

Enter the Horizon Foundation. By supporting Healthy Howard and building upon the Affordable Care Act’s landmark expansion of access to health care, by 2016, 95 percent of Howard County residents reported having health care coverage.

Over its two decades, the foundation has other results that bear out its mission as well.

Seventy bicycles and seven stations opened in 2017 as part of Howard County Bikeshare. 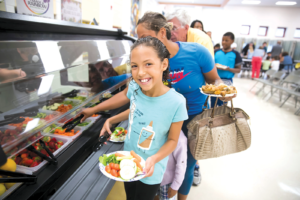 During the first four years of the program “Howard County Unsweetened,” soda sales decreased by 20 percent.

The path leading to those results has been one of hard work always laced with vigorous debate about the best ways to do good. As the years went by, the foundation went through periods of intense self-evaluation, like any successful small business, reflected another former board chair, Shirley Collier.

“Just like any organization, just like companies that go through their life cycle, when they are at a startup phase, there is a lot of enthusiasm, learning, growth and experimentation. Then, at some point, you have to say: What have we learned? How can we get better?”

Collier credits visionary people with a lot of energy for ushering the foundation into a new era. “There was an intense process during which we had to figure things out. It would have been very easy to just not change.”

The foundation’s original tenets have endured, reflected Nikki Highsmith Vernick, current president and CEO. “We still tackle the hard stuff, and we are still in it for the long haul,” she said.

“I think when the foundation was set up one of the things the board felt strongly about was the obligation to tackle the really tough issues in the community,” she said. “Since then we have expanded access to health insurance by working closely with county government and the Healthy Howard program. We have addressed the chronic disease of poor nutrition and physical inactivity. We have started to work on mental health, particularly ensuring that people have access to services. We are helping people make decisions about end-of-life care and about living their best lives right up until the end.”

Defining “wellness,” Vernick pointed out, is inherently a long-term prospect. “These diseases took decades to form. We’re not going to solve them in a
year. But we can make a significant long-term impact.”

The Horizon Foundation now has a sharper focus on its specific three priorities, yet in many ways the foundation is a continuum of what was already started, agreed Gregory Olaniran, current chair of the board.

“We have had to adapt to the times, adapt to how issues rise to the surface,” he said. “For example, 20 years ago, mental health was not discussed like it is today. We are not deviating from the original vision as much as we are expanding it and continuing to grow as issues rise to the surface. You have to be able to grow with the times,” he said. “That’s what we do.”