Kelly Schulz, Maryland’s new secretary of commerce, has been on the job for little more than two months and she’s preparing for the 21st century.

Schulz, previously secretary of labor, licensing and regulation, served in the House of Delegates for District 4, which includes Frederick and Carroll counties. She replaced the popular R. Michael Gill Jan. 1. 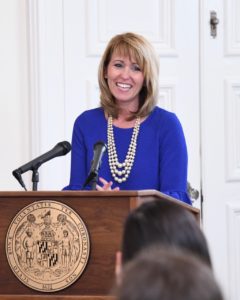 ate that Maryland has world-class research universities, numerous federal laboratories and facilities, and major military installations. Our universities are outstanding sources of talent, and that’s one of the reasons why Maryland’s workforce is one of the most highly-educated in the country.”

Those universities, labs, and military bases serve as launch pads for discoveries and innovative technologies that fuel private-sector business growth, and they employ the services of an array of contractors and private companies, noted Schulz.
Schulz urged businesses to check out the state’s efforts related to access to capital, training for incumbent workers, tax credits for hiring new employees and guidance on site selection.

“We also offer a variety of incentives to make sure that businesses – from brand-new startups to family-owned small businesses to major corporations – have the resources they need to succeed.”

Out of the gate

Schulz plans to build on the solid foundation that her predecessor began. “Partnering with other state agencies, my goal is to make sure that every company, in every region of the state, has access to the resources they need to expand here or to set up shop in Maryland,” she said.

Schulz said she sees a demand for even more talented and skilled workers. “All jobs today are 21st century jobs,” she said. “We have in place several programs to help ensure that our workforce – men and women who are smart, passionate and ready to learn – are able to acquire new skills.”

The rise of technology has impacted even those jobs in so-called “traditional” fields, she added, increasing the demand for workers with a science, technology, engineering or math (STEM) education or background. “It’s imperative that STEM instruction begin at an early age,” she said.

It’s time to let go of the perception that only those jobs in healthcare, biotech, cybersecurity and similar fields are the jobs of the future, she said. “We need workers in every occupation and every field. We need plumbers and electricians as much as we need pharmacists, engineers, and scientists.”

The skills may be different but they all require knowledge of and skills in STEM fields, Schulz said.

“We’re looking at all jobs and all occupations, knowing that as they evolve to meet the needs of the 21st century – and beyond – so, too must the workforce evolve to fill those positions,” she said. “We’re taking steps to ensure that 21st century fields have a 21st century workforce.”

How work is changing

Schulz, who has studied the workforce in rural, suburban and urban settings over the years, believes a strong workforce depends on ensuring a variety of jobs are available and accessible throughout the state. “We’ve traditionally seen more technical jobs and a more diverse offering of jobs in urban areas, and more skilled trades in rural areas,” she said. “Yet as we see every day, work as we know it is changing.”

The key is to approach workforce development from several angles that can be applied in any setting, she said. “Training is a major component of this approach, as are degree and literacy programs. An essential component of all of these efforts is engaging employers.”