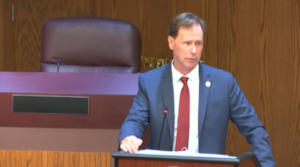 Anne Arundel County Executive Steuart Pittman has filed for re-election at the Anne Arundel County Board of Elections. With the announcement, Pittman’s office released the following statement:
Pittman was elected to Anne Arundel County Executive after his first run for political office in 2018. He was born and raised in Davidsonville on a family farm and went on to graduate from the University of Chicago and worked as a community organizer in Chicago and Des Moines. As a community organizer he built neighborhood organizations, tackled environmental hazards and brought investments into underprivileged communities.
After moving back home to Anne Arundel County, he coordinated for the National Low-Income Housing Coalition and the Association of Community Organizations for Reform Now (ACORN) before starting his own business as a farmer and horse trainer. In 2010 he created the award-winning Retired Racehorse Project that is a national nonprofit dedicated to transitioning racehorses into second careers.
As a farmer, he understands working hard against onerous regulations that have no public benefit and promoting policies to make the industry commercially viable. As Director for the Anne Arundel County Soil Conservation District he pushed for protections for local waterways. Now, as county executive, Steuart has pledged to make Anne Arundel County the best place for all by putting our communities first.