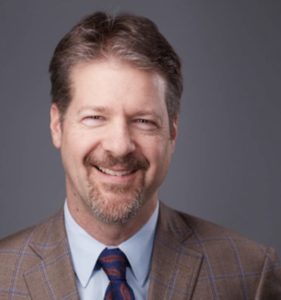 Today, in his office overlooking Symphony Woods, Fitchitt retains a sense of quiet contemplation when he talks about his vision for Downtown Columbia. “Philosophy is a great background for business in that it’s great training for close analysis, logical argument, and legal agreements,” Fitchitt said.

During an interview with The Business Monthly, he said that the real reason he loves philosophy is because it’s about the big picture, “The way we live.”

Fitchitt believes his philosophy about Downtown Columbia is consistent with Jim Rouse, the founder of Columbia. “Rouse did believe that we could, through the places we build, create better lives for people, allow them to reach their full potential.”

One of Rouse’s core aspirations was that Columbia would be a real city, not just a better suburb. “What was created is a fabulous suburb,” said Fitchitt. “Now, becoming the ‘real city’ is our mission.”

Fitchitt also acknowledged the legacy left by his company’s namesake, the legendary Howard Hughes, another visionary who has shaped Fitchitt’s own philosophy. “He was incredibly ambitious, an innovator, an entrepreneur with all sorts of inventions. I would say my own spirit of entrepreneurism has been growing over time,” Fitchitt added.

As a young man just out of college in California, Fitchitt fell in love with building and development when he worked for Guess Jeans. What started as a temporary job became a rush as he built 75 mall stores in four years.

“I took stores through the design process, hired an architect, hired a contractor, delivered the completed project. I found my love of this business then,” he said. 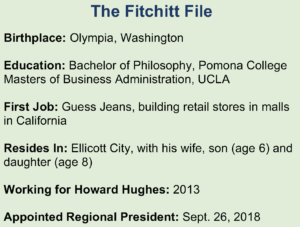 Fitchitt then worked for 15 years for the Westfield Corporation, at that time an Australian-based British-American shopping center company with retail operations in the United Kingdom and the United States, before joining Howard Hughes in 2013.

If he looks back fondly on the days when he could build 75 stores in four years, Fitchitt is now turning a much larger, slower wheel. The planned redevelopment of the 391-acre Downtown Columbia is scheduled over the next 20 years.

The underdeveloped core of Columbia became the focus of a five-year process that culminated with the Downtown Columbia Plan in 2010, which was approved by Howard County. It guides the development today.

The Merriweather District project, now underway, will offer high-density, mixed-use development with 1.5 million square feet of office space and more than 2,000 residences, anchored by a 12-story, 350,000-square-foot office building that will house the headquarters for leading cybersecurity firm Tenable.

The Merriweather District area is about 100 acres and, of that, some 65 acres are permanently protected open space. “We are creating Downtown Columbia as a walkable urban place,” said Fitchitt. “We’ve had significant environmental restoration and reforestation of a lot of environmentally degraded land. It’s the picture of smart growth. We have pockets of high density instead of sprawling growth. You can’t have a walkable environment without density.”

Fitchitt candidly admits he didn’t know much about Columbia when he first moved to Maryland. “But you only have to talk to a few people to realize a lot of them are passionate about Columbia. And a lot of them moved here in the early days in the ’60s and ’70s for the ideals that Jim Rouse intentionally created: ethnic and racial diversity, economic diversity,” he said.

Most people in the local area think of Rouse as the father of planned communities; Fitchitt also considers him a forerunner of affordable housing. “Rouse created mixed-income communities,” Fitchitt said. “Today we are taking the Rouse ideals and bringing them into the 21st century with a very progressive and forward-thinking solution for affordable housing downtown.”

Eight years into what is a planned 30 years of development for downtown Columbia, Fitchitt said he’d like to complete this project in less than 30 years. Here, he will see his children grow up, commuting 10 minutes from his home in Ellicott City. “It’s a great place to raise a family,” he said. “The county has one of the best public school systems in the country.”

As for the future of Downtown Columbia, he said, “Overall, people are seeing more and more the benefits that come with developing the Downtown. We have more great restaurants: Cured, 18th and 21st, Lupa, We have the Soundry, doing very well as a music venue.”

In his day-to-day work of number-crunching, managing people, and leading a massive project, Fitchitt returns often to a philosophy that stands on the shoulders of Rouse. “Rouse saw Columbia as a garden for growing people. That philosophy is at the heart of what I do every day: Columbia should be designed for the people.”