Prepare your business for an active shooter

On the morning of Nov. 8, nearly 100 businesspeople and church members gathered at Grace Community Church in Fulton for training on how to respond to an active shooter in the workplace or the sanctuary.

Their eagerness to learn was coupled with a sense of sadness: the night before, a gunman had opened fire at the Borderline Bar & Grill in Thousand Oaks, California, killing 12 people before turning the gun on himself.

By the time this story goes to press, there will likely be another high-profile incidence of public violence.

For many of us, it’s not a matter of if we will be somehow affected by an active shooter but when. “That’s why training is imperative,” said Sgt. Adrienne Thomas, a community outreach officer with the Howard County Police Department (HCPD).

According to the FBI, there were 250 incidents involving active shooters between 2000 and 2017. Over the years 2016-17 alone, there were 50 such incidents.
“Through the years, these incidents are occurring, unfortunately, at a rapid rate,” said HCPD Officer Steven Mitzel. “And, unfortunately there will be another one down the line.”

“We see it in our own communities in Maryland,” said Mitzel. In September, at a Rite-Aid warehouse in Harford County, a temporary Rite Aid employee shot six people, killing three, before turning the gun on herself.

“We also saw it at the Capital Gazette shooting,” said Mitzel, “and we had it in Ellicott City at St. Peter’s Church in 2012. These are happening in our area. Howard County is not excluded from this.”

What can businesses do?

First, consider what makes you vulnerable, suggested Mitzel. Often it’s the design of your building, particularly if you operate a retail or service business, and you want to be inviting to customers. “Typically your building or office is not designed to keep people out. You want to maintain that openness, but then security measures are frequently inadequate.”

Start by asking: ‘If an active shooter comes in here, what would we do?’

Then assume that the assailant wants to do the most amount of harm in the least amount of time. It’s not always a person with a gun, noted Mitzel. “Someone with a knife or a combative subject can do a lot of damage as well.”

Who is committing these violent acts?

There’s really no consistent profile, said Mitzel, though they are primarily male; tend to have a focused, detached mindset; and may have previously broadcast their intentions on social media, in person, or to a friend or family members. The FBI sometimes identifies a trigger such as mental illness, financial strain, drug or alcohol abuse, death of a friend or relative, or hatred of a certain group.

When the FBI studied 64 incidents in which the duration of the incident could be ascertained, 44 of them ended in five minutes or less, with 23 ending in two minutes or less.

Three minutes is the average response time for law enforcement in an active shooter incident. “That’s really, really fast in our world,” said Mitzel, “but if you’re waiting for us, that’s the longest three minutes of your life. You are your own first responder.”

Your first response should be to get yourself out of denial, said Officer Bonita Alicea. “You might hear a popping sound, and say, ‘That couldn’t be what I think it is.’ ”

Next comes a deliberation phase, in which you have to put yourself in a position to survive. “You have to calm yourself down by doing what  we call combat breathing – those are deep breaths, in and out. You  can remember what you need to     do to survive. Shift to a survivor mindset.”

This is when employees rely on a mental script, one they practice together the same way they might a fire drill. At this point, you must decide whether to run, hide or fight.

When possible, the best alternative is to run, said Alicea. That means part of employee training involves identifying emergency exits and escape routes. If you choose to hide, then lock the door, turn out the lights, stay close to the ground, and, if you’re able, call 911 – but also remember to silence your phone.

The best barricade for a door is a doorstop, so businesses may want to equip each office or room with one. 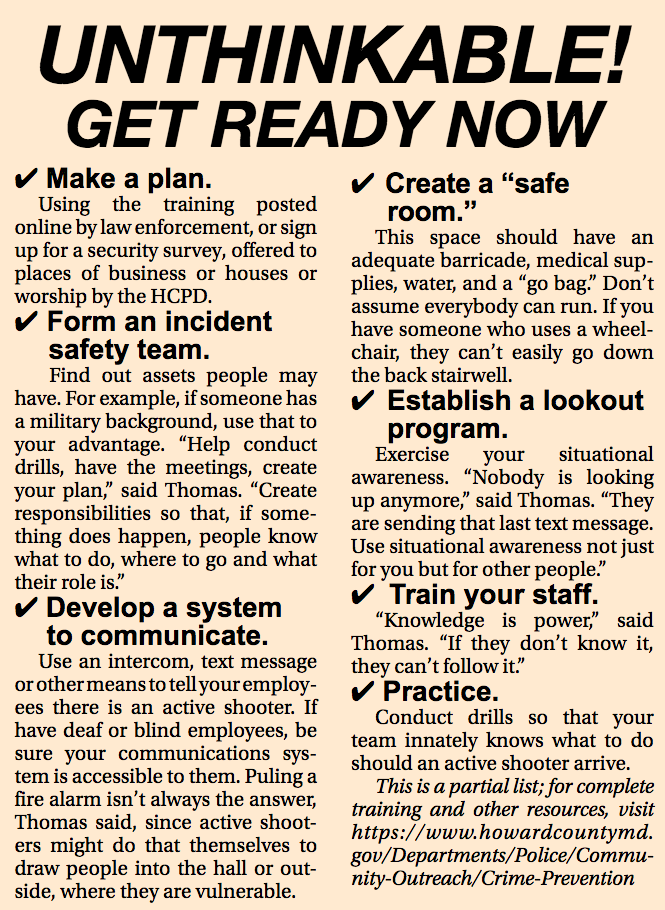 Whichever of these actions you choose, you must commit to your choice until circumstances force you to reevaluate. “Making the decision to hide does not prevent you from putting up a fight later,” pointed out Alicea. “Your actions are all that stand between you, your colleagues and great harm. Fight for your life. Collaborate with those around you.”

When the police arrive, they will immediately try to determine who is the victim versus the assailant. It’s not always obvious, said Alicea. “For example, what if the assailant is mixed in with the kids? We are going to need to see your hands. Don’t make any sudden movements. Avoid yelling. Follow our commands. We’re going to be barking them.”

Just remember, Alicea said: “We’re not going to be nice, you guys.”