THB Balgery & Deli has opened in Columbia Crossing, holding its grand opening ceremony on November 19. This is the eatery’s fifth location, and its first in Howard County. At the ceremony, CEO and co-owner Tony Scotto presented a check for more than $4,000 to Susan G. Komen Maryland. The money was raised from its October Pink Bagels campaign for breast cancer awareness.

THB Bagelry & Deli has been a winner of multiple “Best of Baltimore” awards for its authentic bagels and deli sandwiches. 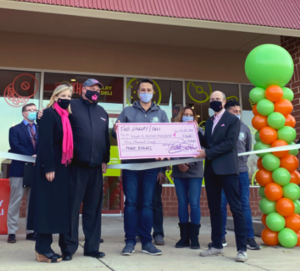