The City of Laurel is at an significant juncture in its history.

Recently, Pure Hana Synergy retracted a much-discussed application to redevelop the Tastee Diner site at 118 Washington Boulevard and turn it into a medical cannabis dispensary.

The diner has been owned since 1976 by Gene Wilkes. He also owns the attached (and recently shuttered) TD Lounge, an adjacent small hotel and a small residence on the property, which is located in a blighted area in the median of Route 1 – about a block from Main Street and just across from the MARC station. 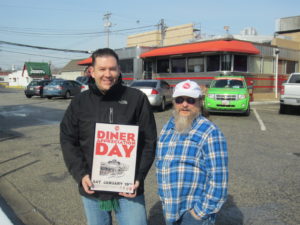 The site, which has been a diner since 1951, also lies less than a mile south from another medical cannabis dispensary that’s just over the Howard County line. However, the city’s municipal code states that dispensaries must be at least a mile from each other and also cannot be within 1,000 feet of a public or private school or a church.

“Those facts made the Pure Hana effort illegal, anyway,” said Richard Friend, a native and one of the Laurel History Boys, a civic group. In addition, another dispensary will soon open (barely) a mile south of the diner in Tower Plaza, at Route 1 and Cherry Lane.

With the diner back up for sale, questions abound about rejuvenating that area. They include how the diner, a historic Commack model, might be relocated to a Main Street that features some nice attractions, but lacks the sizzle to become the destination the locals want it to be.

“It would fit perfectly in the vacant lot where Petrucci’s Dinner Theatre used to be,” he said. “Now, the city can take advantage of its availability. I think the city [considers] that section of Route 1 as a blighted, and occasionally crime-riddled area that it wants to renovate.”

Robert Love, deputy director of the city’s Department of Economic and Community Development. Love said how Main Street would integrate into the Tastee Diner area is “in our bigger scheme of having Main Street branch out. We want to make Laurel a destination, and more than a suburb between Baltimore and Washington with a dual train stop.”

He noted that, “Anything new that happens at Laurel Park would have impact on what goes on on Main Street, which is about a mile away from [the horse racing track’s] back entrance.”

While the city has not engaged outside consultants, last October it garnered Maryland Main Street designation, which allows access to grants and advertising. “For now, one of our focuses is Main Street, which has a 4 percent vacancy rate,” said Love. “Later, we’ll branch off to the diner area,” which is also where the old Sportsman’s Club has been renovated to about 7,000 square feet of retail and office space.

He added that he understands why people are so attached to the diner, “but from our planning and zoning perspective, we had to ensure that it met the criteria for the use of medical cannabis. It did,” he said. “That’s why we recommended approval.”

Despite Love’s comments, Carl DeWalt, city councilman for Ward 1, agreed with Friend that the Pure Hana effort was for naught.

Since Pure Hana pulled its application, that will hopefully give us some time and, as a group, we can find some solutions and save the structure,” he said, “either where it is or by moving it to Main Street.”

Karen Lubieniecki, board chair for the Laurel Historical Society, said, “From our standpoint, I’m glad that we got a reprieve, especially given that the diner is [an historic] Commack model.

“There are a lot of people who are interested in saving at least the aluminum part of it, at least as a sight,” she said.

As for the city purchasing the property, “Its default response is that it doesn’t have the money, even though I don’t think they’ve looked into the cost,” said Friend, noting that the Laurel History Boys are thinking of creating a nonprofit, “to give us more leverage. But there are groups that are eager to help, like Preservation Maryland, which voiced its interest to me, in addition to Main Street Maryland.”

Main Street and the diner represent “pieces of Laurel’s history and there isn’t much left,” Friend said. “If you went to Laurel, what would you tell people you saw?”

For Friend, today is about this new opportunity for the diner and to accentuate the offerings on Main Street, with more varied offerings “and perhaps with a small grocery store, like Trader Joe’s.

“The diner is still relevant, but there’s a better use for it. I don’t expect the city to run it,” he said, “but they can help find somebody maybe even someone who’s operating on Main Street.”